This is a question that has plagued homeschooling families in India ever since the RTE Act came into being. The RTE threw most homeschoolers into confused concern (which continues to date).

The act that makes education “free and compulsory” without any awareness of the inherent contradiction fails to mention any specific consequence for parents who don’t send children to school, even as it makes it mandatory for every child between the ages of 7 and 14 to attend school. This has been further compounded by efforts of parents to seek clarifications or petition for amendments to legitimize homeschooling. There has been no success in getting the government to recognize homeschooling.

While no homeschooler has, so far, got into any trouble over not sending children to school, and the government has, in the past stated that “parents dissatisfied with the education system may choose home schooling for their chidren”, it has consistently stopped short of putting it in black and white, leaving the status of homeshooling in a completely unnecessary limbo.

For example, on the 8th September 2010, Times of India, Pune Edition carried a very reassuring report by Neha Madaan about Kapil Sibal’s views on Homeschooling with regard to the RTE Act titled “RTE: Homeschooling too is fine, says Sibal“. 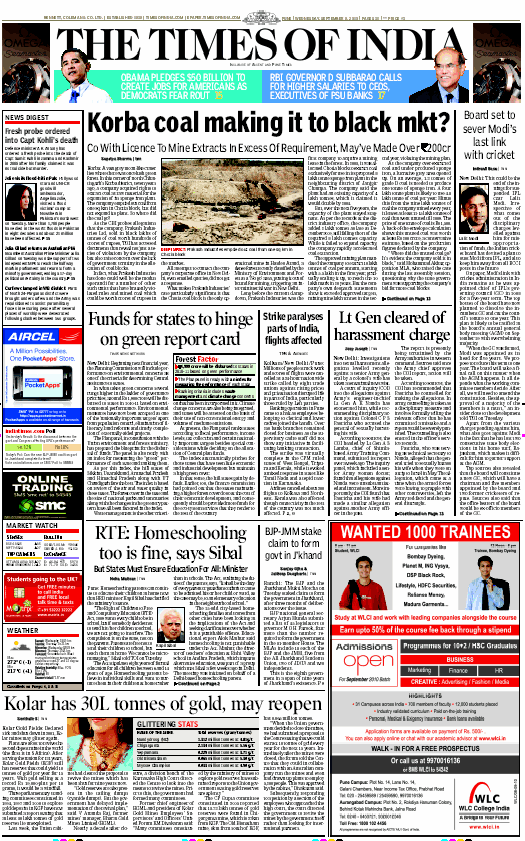 Pune: Homeschooling parents can continue to educate their children at home now that HRD minister Kapil Sibal has clarified the ministrys stance.

The Right of Children to Free and Compulsory Education (RTE) Act,2009 wants every child to be in school,but if somebody decides not to send his/her children to school,we are not going to interfere.The compulsion is on the state,not on the parents.Parents are free not to send their children to school,but teach them at home.We cannot be micromanaging, Sibal told TOI on Tuesday. The Act stipulates eight years of formal education for all children between 6 and 14 years of age.Homeschooling parents believe in individual skills and want to nurture them in their children at home rather than in schools.The Act,outlining the duties of the parents,says “It shall be the duty of every parent or guardian to admit or cause to be admitted his or her child or ward,as the case may be,to an elementary education in the neighbourhood school.”

This is all very excellent till you realize that any online version of the article has gone missing. Nor is this reported in any other edition of the Times of India before or since.

On the 10th January 2011, P.K. Tiwari in the Department of School Education and Literacy, Ministry of Human Resource Development wrote to “Shri Donnelly” Mike Donnelly of the US-based Home School Legal Defense Association explaining the stand in some detail in response to Mike Donnelly’s letter to Kapil Sibal requesting for a clarification on homeschooling as an education option in India as folows:

This has reference to your letter dated 15th September,2010 addressed to Mr. Kapi Sibal, Minister of Human Resource Development regarding home-schooling as an educational option in India.

2. In India, some parents do opt for home-schooling of their children. Parents who are otherwise dissatisfied with the curriculum and syllabus followed in school, or feel that the school schedule does not leave their children with any spare time to pursue other interests follow the home-schooling approach. There is no separate syllabus for homeschooling. Most children use the text books prescribed for formal schools. On reaching Class 10 a home-schooler can take the board exam privately by registering with the National Institute of Open Schooling or International General Certificate of Secondary Education. This is done at the child’s pace and time, unlike several other countries including Austria, France, Poland and UK, which have regulatory systems in place, to monitor the progress of the child.

4. (sic) While the idea of home-schooling may be conceptually sound, in India we are currently working toward universalisation of education – ensuring that each child has a school within accessible reach, both at the elementary and the secondary level. At this stage of our educational development it may not be viable for us to formally opt for a home-schooling system. Such parents who voluntarily opt for such systems may of course continue to do so.

5. However with a view towards understanding how home-schoolers learn and cope in life, the National University of Education Planning and Administration has been requested to undertake a study on the subject, which may guide us in future policy formation.

Clarification on homeschooling issued by Ministry of Human Resource Development

This is concerning, because the HRD Ministry appears to see the US as advanced on a track and able to diversify into homeschooling, while India lags on the same track and thus can’t. Apart from the dangers in blindly aping an alien education system’s standards, there is a danger in seeing homeschooling as some kind of drain on the system. Homeschooling does not harm the existing education system in any manner, including diverting resources.

More worrisome is the case of the petition of Shreya Sahai, who had asked for recognition of homeschooling as the existing education system does not fulfill her needs. The Supreme Court directed her to approach the government, which responded with something similar to the views quoted above so far. They had no intention of legally recognizing homeschooling, but were not planning on persecuting homeschoolers.

This in itself is worrisome, as we have here a government that tells people to ignore the law they have made if it suits them. However, things deteriorated further when Social Jurist advocate Ashok Agrawal objected, submitting “The demand on the part of the petitioner for home-schooling or alternative forms of schooling and the stand taken by the Union government in support of such demand through counter affidavit dated July 16, 2012 is based on completely casual and erroneous interpretation of the letter, spirit and intent of the RTE Act.”

So now we have an unelected, unaccountable individual dictating to the government what the correct meaning of the law it created is, when the person responsible for creating it had also publicly stated that it was not an imposition on children or parents, but the state.

This led to a government U-Turn on their stand quoted so far, and they admitted in court that the RTE does not allow homeschooling.

This is very worrisome for homeschooling parents. But it is also terrifying for thousands of alternative schools, that the idea of accessibility of education has turned into a regimentation of what and how children learn.

Additionally, the lack of recognition for homeschooling leads to many practical difficulties for homeschooling children in pursuing their potential. Competitions and scholarships often require the name of a school for entries to be valid, leading to a need for repeated improvisations and potential failure to secure seats for the child.

It is an ongoing dilemma created for no apparent reason. It is unclear what harm is done by recognizing that many parents educate their children at home. Homeshooling parents being ignored by legal authorities as a verbal guarantee is not reassuring enough when the legitimacy is denied and it is a child’s education and future at stake. It is also no guarantee that this will not arbitrarily change without warning. As it already did in court.

Homeschooling parents on their part are determined that they will not be deterred from making what they see as the best choice for their children regardless of law.

The only hope is the badly written RTE Act itself. While it says every child between six and fourteen years of age must attend school and outlines consequences for schools that refuse to admit children, there is no consequence stated for a parent who refuses to send their child to school. And there is one more hope. Our poor implementation of laws.

And thus it is that a very enriching and highly personalized and emotionally nurturing method of learning is a gray area in India. Completely unnecessary and something needs to be done urgently on this front if children who may wish for jobs or further education are not to be marginalized in the future.

19 thoughts on “Is homeschooling legal in India?”